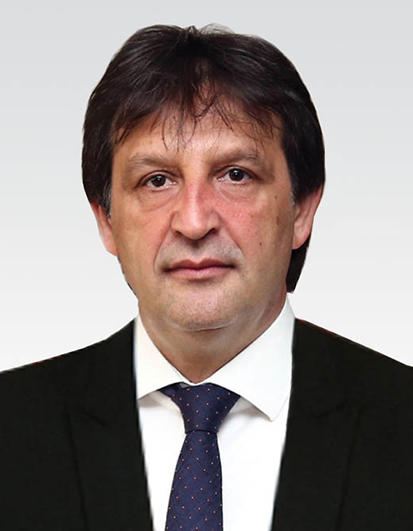 Bratislav Gašić was born on 30.06.1967 in workers' family of father Radoje and mother Mirjana.

He gained his secondary education in the Educational Centre "Bosa Cvetić" and got a degree of a constructional technician.

He graduated as an economist from the Faculty of Economy of the University in Niš.

He lived and worked in Greece for several years and was a co-owner of famous Serbian brand "Grand kafa".

He was an MP within the list of Serbian Progressive Party until August 2012.

He was the President of the Board of Directors of the public company "Srbijagas" from March 2013 to December 2013.

He was the Minister of Defence in the Government of the Republic of Serbia from April 2014 to February 2016.

He has been appointed the Director of the Security Information Agency of the Government of Serbia on 29th May 2017.

From 1985 to 1986 he served his military duty in the military corps of military engineering in Bela Crkva and Bačka Topola.

He is a prominent sports worker.

During 1990s he was a member of the Assembly and Steering Committee of the Volleyball Federation of Yugoslavia.

He was a member of the Steering Committee of Football Club "Napredak" from Kruševac several times.

He was an owner of women’s volleyball club “Kruševac Santos” – First B League.

He acted as a director of football school of the Football Club “Napredak” for the period of four years.

Until the foundation of Serbian Progressive Party he was not politically engaged, nor a member of any party.

He is one of the founders of Serbian Progressive Party.

He has been a member of the Presidency of Serbian Progressive Party since 2009.

He was one of vice presidents of Serbian Progressive Party in the period from 2012 to 2016.

By being appointed to the position of the Director of the Security Information Agency, he has frozen his membership in all positions in Serbian Progressive Party.

1998 – He was entitled by the City of Kruševac as the Manager of the Year of Kruševac city;

December 2012 – National Alliance for Local Economic Development (NALED) awarded him a special acknowledgment for reforms completed in city administration and contribution to advancement of business environment;

2013 – Winner of  a medal “Kapetan Miša Anastasijević” as the Personality of the Year of the City of Kruševac, awarded by the Business Chamber of Kruševac and “Media Invent”;

2014 – Named the Personality of the Year of Rasina Management Board by the Business Chamber of Serbia and “Media Invent”;

Winner of Vidovdan Award of the City of Kruševac for the year 2014;

2014 – Received the Golden Coat of Arms of Brus Municipality, which is the most important recognition for the contribution in the development of the municipality;

Winner of the commemorative plaque of Varvarin municipality for his devotion in providing aid and remedy for the consequences of floods;

Awarded a Charter with Gold Commemorative Plaque of Krupanj Municipality, for accomplishments of great social importance for overall development of Krupanj municipality;

Winner of the award “Evro korak” (Euro-step) for contribution to the development of the City of Pirot:

Awarded a Charter of Mali Zvornik municipality, as recognition for help in providing remedies to consequences of floods;

Received an Appreciation Award from the City of Kruševac, for personal engagement and the engagement of the Ministry of Defence and members of Serbian Army in providing aid in the aftermath of natural disasters and emergency situations in Užice;

Winner of a Special Award of Obrenovac municipality for extraordinary participation in saving and evacuating of population, as well as for providing aid for consequences of floods;

He has been married to his spouse Irena for the past 26 years; they have three adult sons Vladan, Milan and Nikola and grandson David.